Nørrebro
Nørrebro is known to be the most multicultural part of Copenhagen. Since the early 1980s, the district has been known for the riots that regularly erupt. The enormous growth of the neighbourhood caused a change from mainly blue-collar workers to a more middle class demographic. The threat of houses being demolished because of this change, led to serious disturbances, leaving particular parts of the district with a very bad image. Changing this image around is the main objective of the urban renewal in the district, with a focus on the development of the public areas. A bicycle tour will lead us along the new public spaces in the area.

We start the day at the Dronning Louises Bro, the bridge that connects the city centre with the north-western districts Nørrebro and Nordvest. The bridge demonstrates the efforts that have been made to make Copenhagen a more liveable city: where it was originally built as a connection for cars, now most of the space is designed as bicycle and pedestrian space. The benches along the railing create places to sit and watch the people pass by. Now it not only functions as a means of transport, but also as a public square that makes Nørrebro a part of the city. 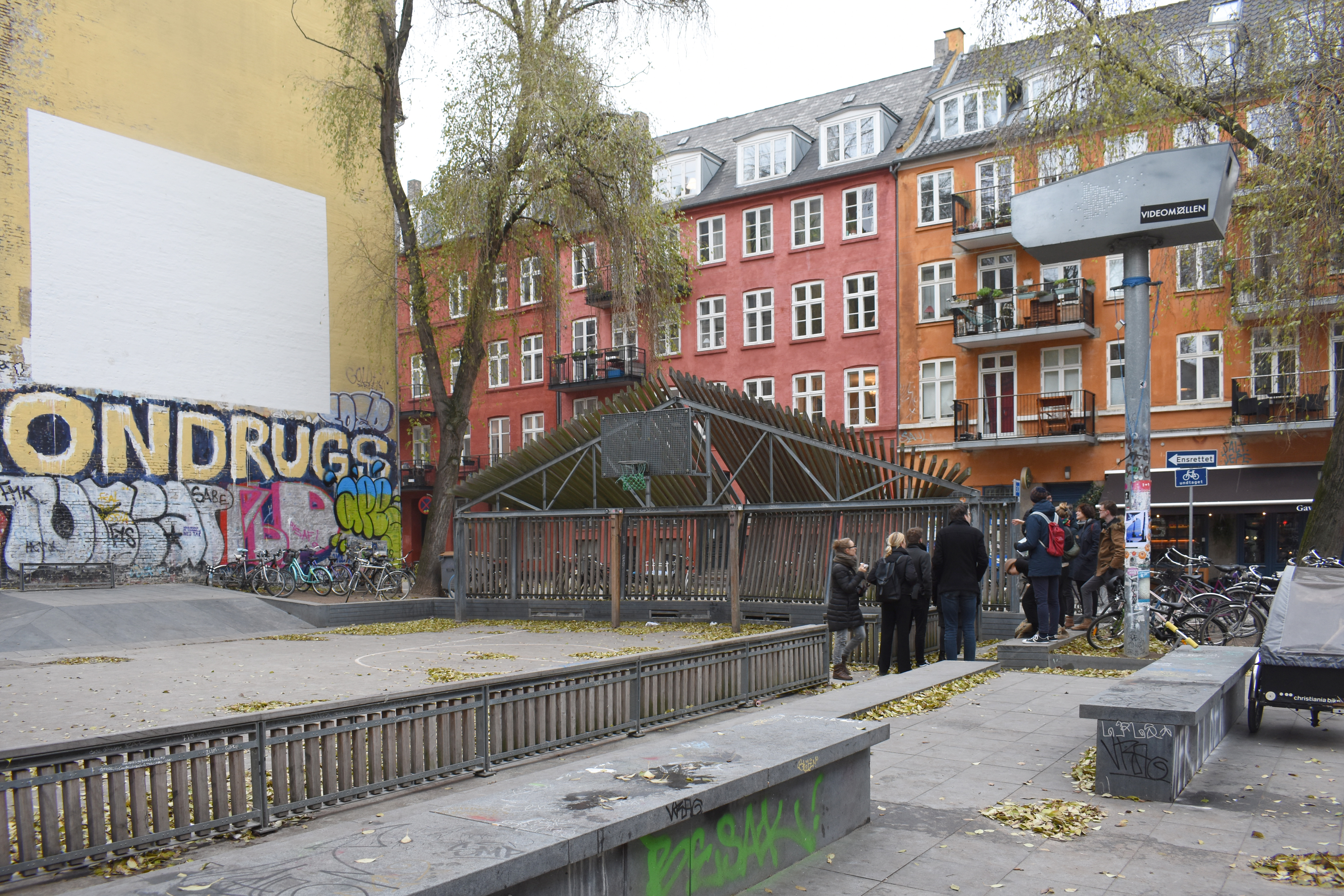 After crossing the bridge we follow a sequence of new public spaces and facilities through the neighbourhood. It becomes clear that the residents of Nørrebro know a very strong community feeling. Many projects are local initiatives or created through a process of co-creation with neighbours. A healthy and green environment with a variety of elements for movement and play are a recurring theme. The public spaces are well thought off; they combine different functions to create both movement as well as places to stay and meet other people. Examples are, a skate park combined with an open air cinema and a seating place, initiated and designed by a neighbourhood union. Or a municipality organised recycle centre in the middle of the neighbourhood where you can not only swap the things you don’t need any more but also meet your neighbours, or a park with mixed functions for both small children and elderly, so they can  benefit from each other’s presence. These initiatives change the image of Nørrebro, which is now becoming very popular with young people and families. 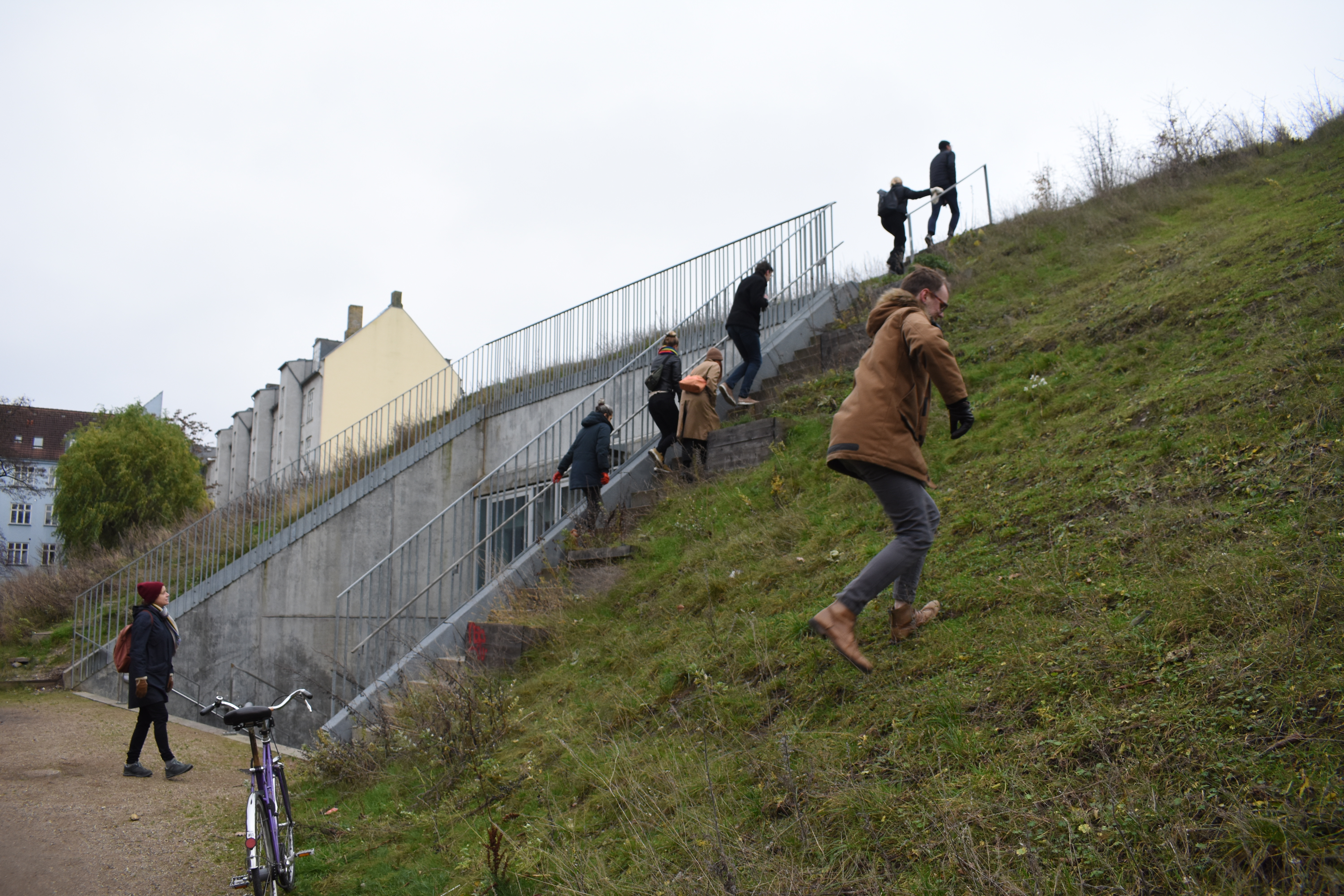 One of the main efforts made is to create more open space for the residents. The collaboration between neighbourhood unions and municipality to achieve this are truly striking. Schools participate in this by redesigning the schoolyards to get rid of the fences and open them up as a public space with landscaping elements that can also be used for play. Residents participate by making the courtyards in residential blocks accessible, in collaboration with the municipality to fund the redesign of the courtyards. The most outstanding example is the Korsgadehallen, a sports hall in a former courtyard, covered by a grass hill creating a park for the residents living around the hall, and a public facility for the whole neighbourhood. In these collaborations both municipality and users have input, creating a sense of ownership and therefore safety.

Nordvest
While Nørrebro has been a part of the city for a longer period of time, Nordvest only became part of Copenhagen about 100 years ago. The City of Copenhagen has categorized Nordvest as a deprived urban area. Today, the area is in the early stages of urban transformation, as former industrial buildings and business grounds are converted into residential housing, green areas and new service businesses. It is relatively cheap to reside in Nordvest; the area is dominated by small apartments with 45% of apartments being less than 60 m2, and 35% being social housing. Therefore the area is popular with low-income households and students. The neighbourhood is said to be socially challenged, with a high amount of unemployment and undereducated residents. Along the old train tracks, we follow a part of the “green path”, a 10 km long bicycle route connecting Nordvest to Nørrebro, into the neighbourhood. The difference between both areas becomes immediately clear: Nordvest shows its diversity in the multicultural shop fronts, the materials of buildings and public space and the people on the streets. The raw face of the former industrial area is still visible, which gives the area something unpolished. Passing several parks and activity areas along the way, we end at the Superkilen Park. The population of Nordvest is one of the most ethnically diverse of Denmark, in that about 30% of the citizens are immigrants or their descendants. This urban park, designed by BIG, acts as a giant exhibition of the multiculturalism of the area, showcasing urban elements of every of the represented nationalities in the neighbourhood.

We continue our trip towards the library of Nordvest, designed by COBE Architects. This new extension to a culture house in the middle of a residential neighbourhood attempts to open up the existing building for the surrounding residents, making it more inviting and public. The library turns out to be more than a traditional library: it acts as community centre, study room, workshop space, concert hall, department of the city hall and restaurant. We see it being used by a diversity of people: elderly, students and families.

Closing our tour through Nørrebro and Nordvest, we enjoy a lunch at the Nørrebrohallen. This sports and culture complex is located in the old train depot and gives form to a combination of sport halls, a library and the “multisalen”, providing a platform for events, flea markets, concerts and conferences. The eatery in the heart of the center, based on the skills of ethnic minority women, serves us a delicious last meal before we fly back to Rotterdam, full with inspiration to implement in our own work and projects.