Denmark is a socially progressive, tiny county in Scandinavia, Europe. It is famously known as the happiest country to live in, and the high taxes enable the inhabitants to have access to healthcare, education, financial support and opportunity for all. There is an approach where the collective is more important than the individualist, and so the sense of community is embraced. Innovation and investment in public space with the city is an example of this collectivity, as well as the progressive and inclusive lifestyles of collective living. Veldacademie chose to visit Copenhagen as we were intrigued by this approach to city life and the value it places in its inhabitants; valuing social inclusivity, design innovation and efficiency. Our three graduates wrote a blog about our excursion, from their own field of interest. One of the students is investigating emancipation between the different social classes, another is looking at inclusivity within the immigrant community through sport, and the third student is applying education within the public sector. Copenhagen was a case study that they were inspired by and they all wish to instill some of these socially conscious elements within their own projects.

Ørestad
The city is grey, shrouded in drizzle as we leave the hostel and venture out for the day to explore. Leaving behind the grand, 19th century architecture of the centre, we travel further into the outskirts of the city. Cycling down a slender peninsular of development, flanked on the west by fields of wasteland; the suburb of Ørestad has an eerie, and strained atmosphere. Large monolithic buildings loom out from the mist, and the streets are vacant; punctuated only by the rumble of the metro above us. That line is the artery of the region; linked to the heart of Copenhagen by the empty metro cars that pulse steadily throughout the day and night. It is a hostile jungle of concrete and construction, shrouded by mist from the farmland alongside, yet we are assured that the area has a deceptive, imperceivable warmth, and that people love to live here. The population is growing, spurred on by the long awaited development that was halted during the recession. The municipality is at the mercy of developers to finance the metro line, and now the district is overburdened by residential tower blocks; a homogeneity that stifles the vibrancy and energy of what was planned to be a diverse and vibrant extension of the city of Copenhagen. Ørestad is the crossroads into Scandinavia for Northern Europe; the intersection between the two nations of Sweden and Denmark, and the region has been suffocated by decades of bad circumstance and poor planning. It is slowly reviving itself, to become a community connected directly to the centre of the city. 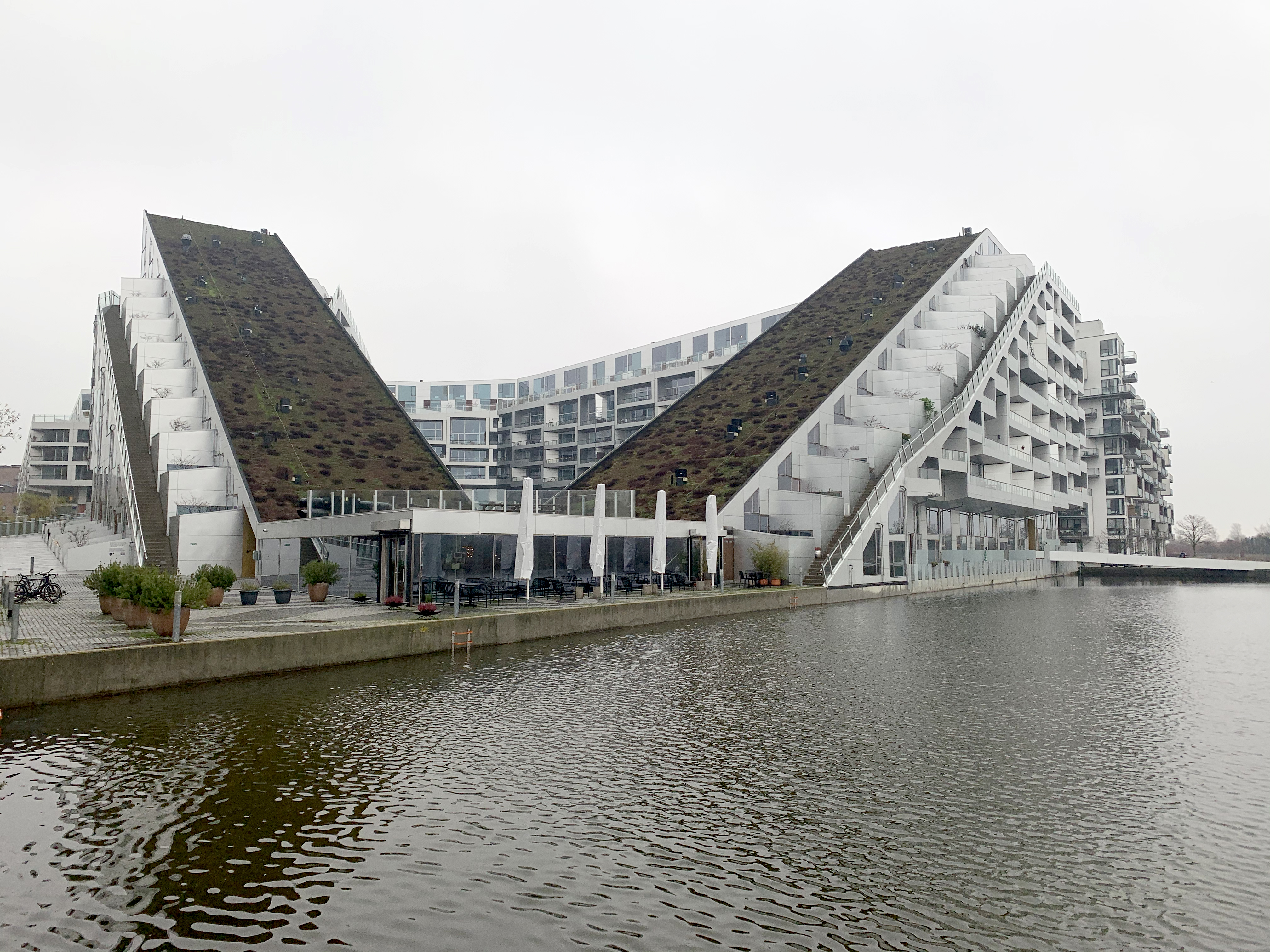 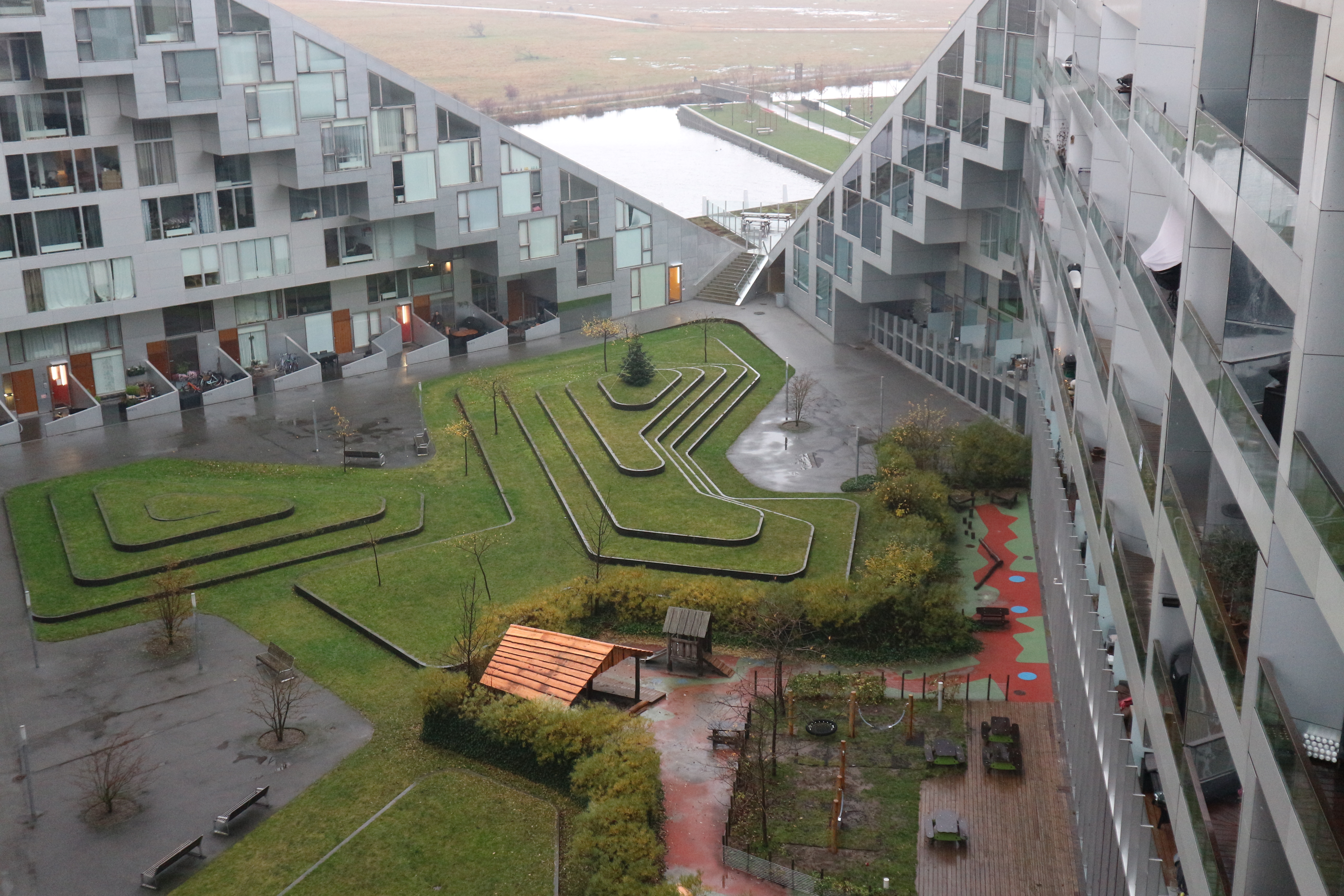 The 8House
We follow the overhead metro line until the road stops, the parklands begin and the horizon fades into mist. There, we find the 8House (‘8Tallet’ as it is know in Danish and designed by BIG Architects). It is a housing block with a floorpan in the figure of an eight; with sharp bevelled aluminium facades framing hundreds of balconies, windows and apartments. An elevated, sloping street meanders up along the facade, crisscrossing the geometry of the 8 design and linking the layers of functions together. Shops, offices, schools, apartments, courtyards and cafe create this multi-faceted, and layered building.

We meet our guide, Giuseppe Sciacca, a Sicilian engineer who lives in the building, and he proceeds to tell us of the building. Following him, we pass the housing with their patios adjoining the path that wraps around the building as it intersects and traverses towards the summit. From there, we have a spectacular view towards the corner of the building that folds away and reveals the empty marshlands that extend as far as the eye can see; the Baltic Sea obscured in mist and behind the forest. 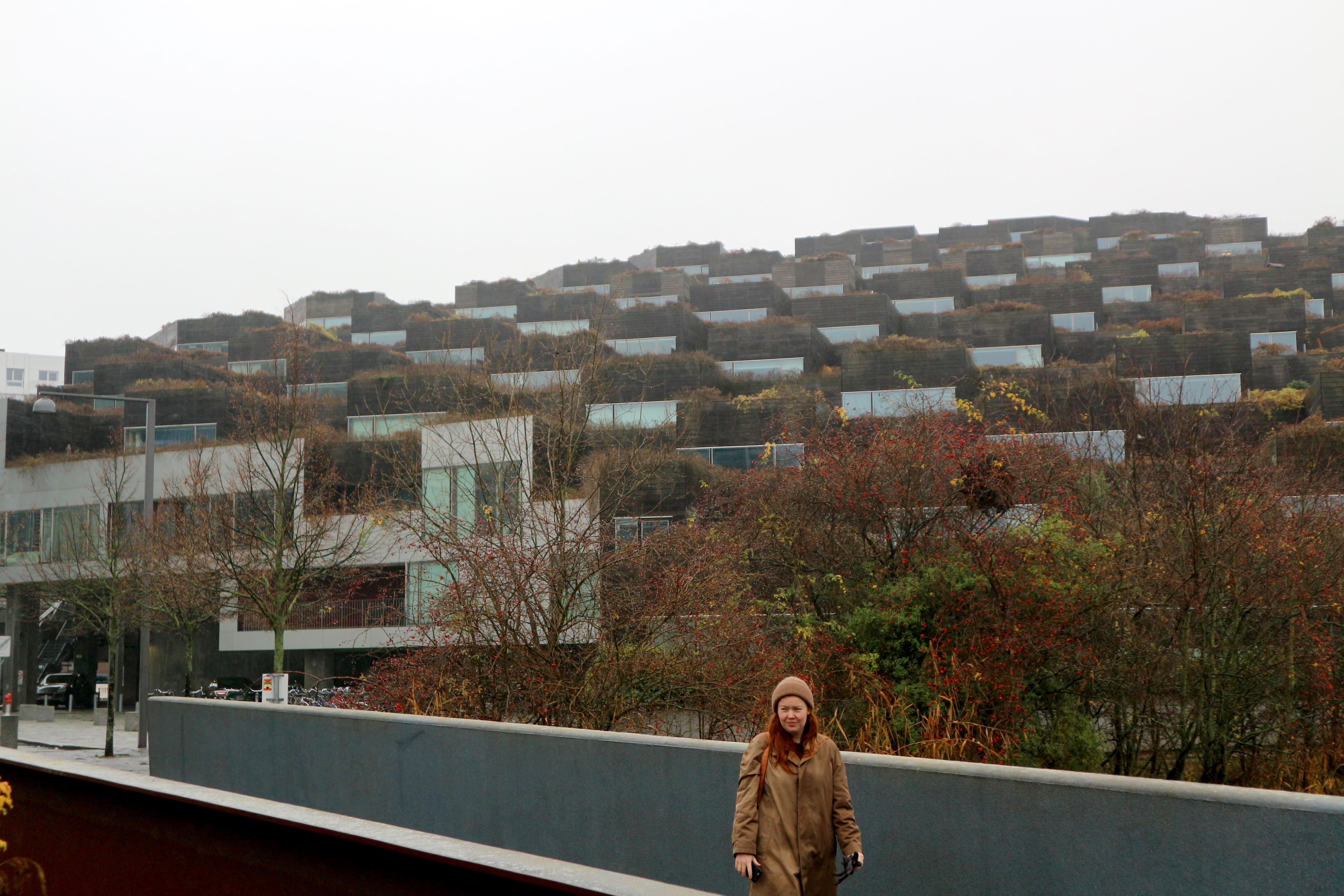 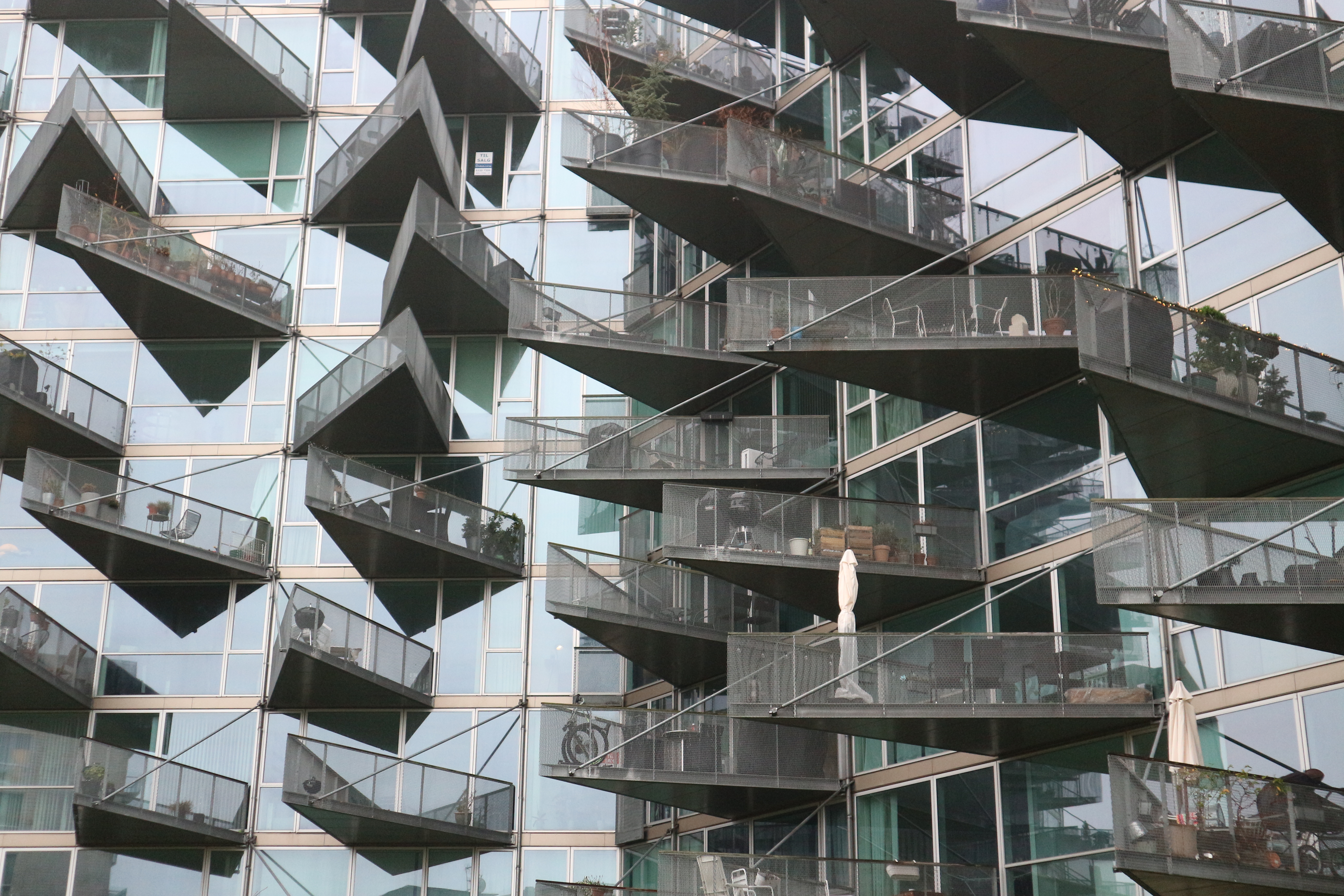 The Mountain House and The VM house
Tour concluded, we meander though Ørestad on the bikes and visit two other architecturally acclaimed developments from the same firm. The Mountain House with its square modular houses and terraces that step away in a diagonal plain across the square parking garages below. And the VM house, like the 8House’s geometric floor-plate, is two blocks forming the letters “V” and “M”. The V house has spectacular triangular balconies that protrude from the facade. Like the prow of a ship; an armada of them bear down upon the pedestrian below.

Ørestad Streethal
We next visit a small community sports centre, Ørestad Streethal by NORD Architects and have a lecture by the architect Mans Nijkamp who mediated the co-design process within the community. We test out the sport hall with a spirited game of football, and surmise that as an asset of the community, it is a way to help bring people together through sport. 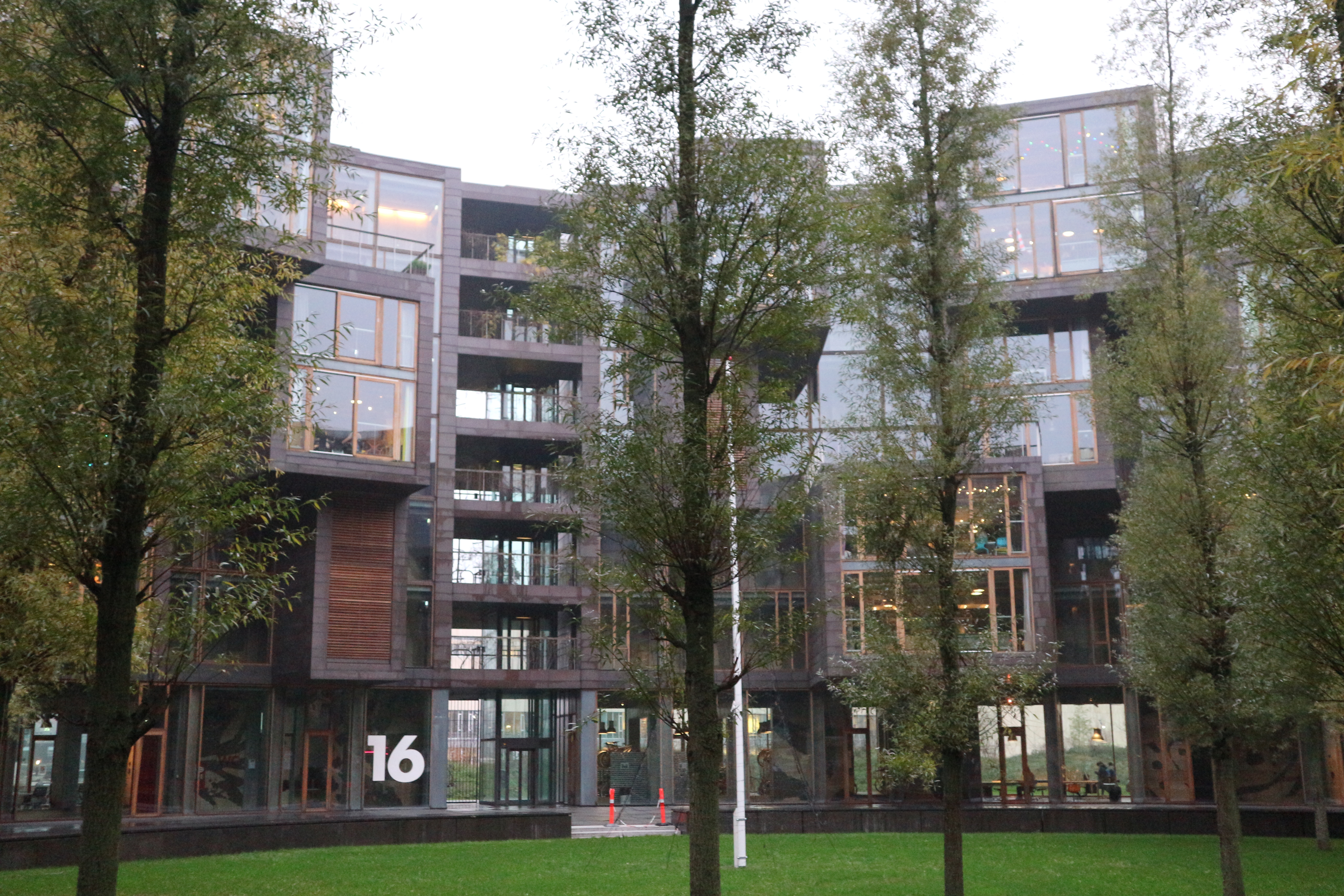 The Tietgen Residence Hall
We cycle back into the city to another residence, this time for students. The Tietgen Residence Hall is a circular building with studios on the perimeter and common lounges inwardly facing the communal courtyard. The ground floor has common amenities such as music room, craft rooms, study halls etc for the students. By coincidence, we were able to tour the halls with a student resident, and to visit his studio apartment in the building. With simple materials, and moody lighting, the building had excellent craftsmanship and was an example of the legendary Danish design aesthetic.

Later on that evening, we experience Danish cuisine in a crowded restaurant within the historic part of the city. Jostled amidst the sounds of Danish, with the optimism and energy from our introduction to the city of Copenhagen, we break bread together.