The neighbourhood of Oud-Charlois in Rotterdam-Zuid belonged to one of the Vogelaar districts for years.  In Bas Lewerissa's student design for the area of the Charloisse Gardens, all the nighbourhoods’ existing strong elements are deployed, where a newly constructed city greenhouse must operate as catalyst of social, educational and economic activities. Simultaneously Addition of new housing typologies function as a concrete response to the current task around the undeveloped land along Vestia terrain, along the Voornse Vliet. 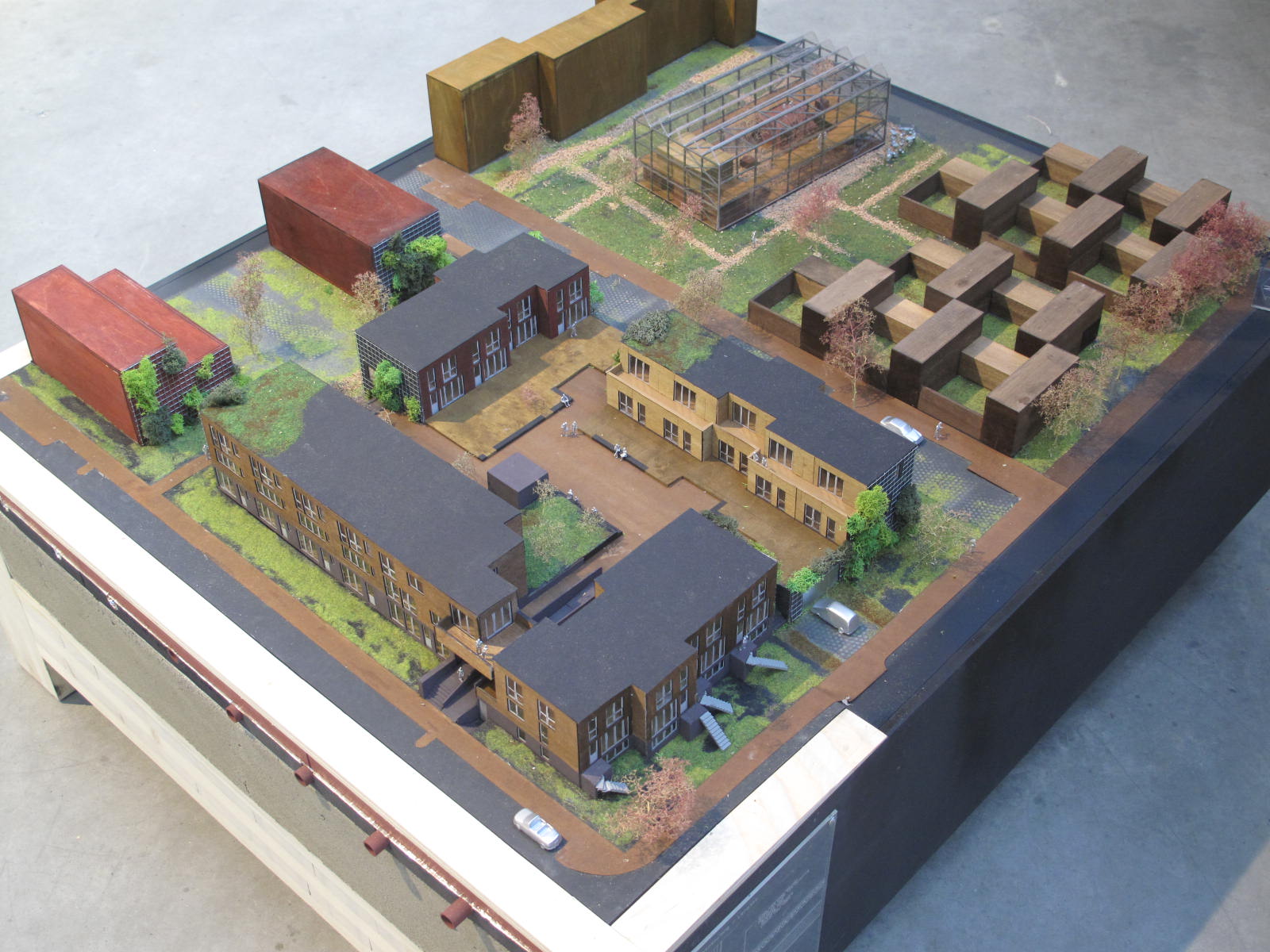 The district is characterized by unilateral housing consisting mainly of apartments from the first half of the last century with an average of 75m2. Regarding size and typology, the neighbourhood lacks the opportunity of switching to a single family home  with a surface area between 100-120 m2. The consequence is that residents who represent the social and economic capital in the nieghbourhood leave and settle in surrounding parishes such as Barendregt and Ridderkerk.

By placing current residents at the center, with ‘place attachment’ as goal (binding to the neighbourhood), a function with additional value to the neighbourhood is the starting point for the design. This means that the design of the space should be aimed at neighbourhood functions that are socially, economically and physically accessible. A function that is already deeply rooted in the the planning area is that of the playground. Two thirds of the playgrounds are meeting places for local residents in the district and they also organize other activities. The speeltuinvereniging is an easily accessible activity; the degree of organization is such that there are no barriers for individuals in the group to join. To facilitate these lasting relationships in the district, the function of the playground is reinforced with a new feature in the form of a "city greenhouse", a multipurpose building, with it’s focus on social, educational (three existing schools) recreational (vegetable garden) and commercial activities.

The greenhouse, vegetable garden, playground serve as parochial domain, in which the closed world of the dwelling may be extend into the semi-public domain, so the worlds of different groups that are socially often separated are spatially intertwined. They use the same space to organize their daily lives. Because a social, ecological, educational and spatial context is created in the planning area, also with links outside the district, there is a greater chance of success and the whole project is less vulnerable when for example one individual element is eliminated.

Social and physical foundation
Young people are able to see (through an educational program at school) where their food comes from and learn to focus on other, healthier ways of entertaining themselves than is often the case. Young people can come in contact educationally with commercial activities (sales of goods at the local grocery store or restaurant of the city greenhouse). Users of the vegetable garden come into contact with physical activities that will benefit people with sedentary jobs. Provided the ground is properly controlled, the harvest of the neighborhood vegetable garden is healthy. No chemicals are sprayed and there is no food industry involved. Regarding sustainability, local short-and long-cycle processes are created, with which a direct link is made with technical design as water retention and water storage, the use of sustainable materials and the application of vertical gardens.

Economic model and management.
The question is why in areas, where the social and physical bonding with the neighborhood is already under pressure of time, effort and commitment, would residents invest more in the public space. In other words, what's in it for me? Housing associations could look at new forms of contracts with their customers. Rents are no longer purely the use of the house and partly energycosts, but a more flexible system will be used, in which the tenant takes responsibilities in respect of housing and communal space and has the opportunity to earn refunds on the rent.This can be done, by takes over a portion of the maintenance of the house as tenant, receiving the responsibility for the supervision and maintenance of the collective space of the houses, or by long of short-term commitment to use and maintenance of the communal garden. In the planning area, a comprehensive VVE could be active in the field of management of the communal space and a specific association would take up the role for the management of the playground, incorporated with features such as hall rentals. Commercial functions such as catering can then run on a leasehold system linked with the playground. The association remains owner of the land, however, a catering facility may be started and built. In this way housing corporations can expect a certain commitment of their residents in a different way, without relying on voluntary efforts. It is also possible that the corporations can reduce the costs of collective management and maintenance, so one of the causes of the gradual deterioration of the direct return from the property exploitation can be controlled. The performance of physical activities in the district such as maintenance of collective structures or common green provides the buyers of the homes of the district the opportunity to get a reduction on the VVE contribution. In this way, a win-win situation arises for residents, municipality and corporations.