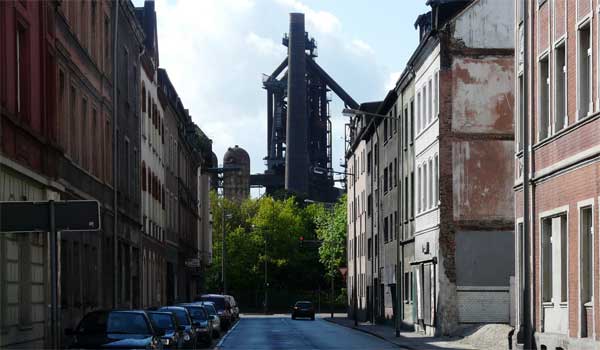 Fieldacademy is troughly familiar with the policy of the Rotterdam “Wijkaanpak” (Neighbourhood Approach). This makes that we witness the issues of the city from nearby: an outdated and on-sided housing stock, an underprivileged population and an urge for the redevelopment of freehold land and harbour areas.

To maintain a broader perspective and finding creative ways to deal with these issues, Fieldacademy collaborated with graduate student in organizing an educational visit aiming to compare projects in inner urban redevelopment with the Rotterdam situation. This trip led us to two German cities: Duisburg and Leinefelde-Worbis. The cities gave us a surprising view with a lot of similarities and at the same time crucial and meaningful differences.

In many aspects, Duisburg resembles Rotterdam. This urban-industrial agglomerate is worldwide known for its large-scale steel- and production industry. Located along the Rhine river, Duisburg possesses the largest inner harbour in the world.  Besides that, Duisburg is also noted for its social-economic problems. The urban development projects that have started decades ago aiming to improve liveability, have had various effects. Three of these projects were visited during the excursion.

The Innenhafen is going to be the eye-catching part of the city centre. Aim for this project is to create an area that is attractive for both investors and residents. Combining housing and employment is a main theme in the development of this area. Several innovative ideas expressed in the project containing living along a shared garden and water purificating town canals. Opening a playground in the centre of the neighbourhood had a positive effect on attracting couples and young families to the area. In many ways this area bears resemblance to the Kop van Zuid in Rotterdam.

A couple of kilometres from the city centre we find the district Ruhrort, which lies isolated from the rest of the city and has a historic character, similar to Pernis. Also the accent on Grünraume (green spaces) as a transition region to the surrounding industrial areas corresponds with this district in Rotterdam. In the Ruhrort area, most projects that focus on urban development have shutdown due to limited funding. As the - generally private - real estate is depopulated, the city council does not have many resources left to influence development in this area. The local authorities hitch on to regional development programmes to stimulate transition of the area and hereby has managed to increase the quality of the urban context. Also the multinational company Haniel, wich is based in Ruhrort, has contributed to this developments. They also invest in the representativeness of the area. Since the isolated location of Ruhrort still seems to be the major cause of the departing of entrepreneurs, one can ask if this developments will have effect on the long term.

Bruckhausen
Creating green spaces is the mantra in the Ruhr area and we experience this when we visit the Bruckhausen district, which is almost cancelled out by the enormous ThyssenKrupp steel factory surrounding the neighbourhood.  Most of the apartments next to the factory are vacant, which causes a strange contrast in the neighbourhood. The municipality decided to dispossess and tear down 300 houses, aiming to maintain and strengthen the  remaining housing stock. The demolition areas will transform into a big public park, co-financed by ThyssenKrupp.

We don’t have a comparable situation in Rotterdam, but the way issues are taken on is inspiring. By investing in social networks for over 15 years, an extraordinary good understanding with the inhabitants has arised. The inhabitants support the plans that are made, which is expressed in the way people annex the vacant grounds with wall paintings and meeting places. An other important factor for the success of this project is the mandate and financial power the project got called ‘Stadtentwicklungsgesellschaft’.

Leinefelde-Worbis is small city close to the former DDR-border and has only 19.700 inhabitants. After the unification of Germany, Leinefelde had to deal with gigantic problems. In a very short time, 70% of the population lost their job. This would certainly lead to a total vacancy of the city, as happened to a lot of East Germany cities. Most of the abandoning would probably happen in the apartments built during the DDR period in the large Plattenbau (unit constructed) areas. For this not to happen, the city intervened. The mayor, who was born and raised in the city himself, started the experiment to renew the apartments in various ways. The vacancy that had occurred, combined with the flexibility of the unit constructed houses, was used as a change  to create spacious and affordable apartments in the old flats. Thereby, the apartments at the ground floor where provided with large gardens and suddenly became very wanted. The height and density of the flats was reduced and they where high-quality renovated. To fund the renovation experiment, municipal grounds were sold for freehold land. In this way, the municipality also generated more employment.  A clear and consequent executed plan lead to a massive confidence in the future housing situation, which prevented the total abandonment of the city.

The problems faced within the two German cities are in certain ways considerably bigger than we deal with in Rotterdam. This made us ask generic questions as: Can companies and other private partners be involved in urban development projects in their own region and what role can they play? How do we organize continuity in urban development, undeceiving ourselves from short-term needs and wishes? In which ways can we invest in social networks, so that inhabitants can participate and raise the quality of urban development?