DESIGN COMPETITION FOR THE REDEVELOPMENT OF TWO SQUARES IN THE TARWEWIJK

The Tarwewijk district of Rotterdam is a transient district: many people live here only for a short period of time. In order to strengthen the bonds between the residents of the Tarwewijk and the neighbourhood, two squares around the monumental school building on Zwartewaalstraat will be redesigned with and by people from the neighbourhood. The Veldacademie has launched a design competition for this purpose. People from the neighbourhood can participate in the competition and help decide which design will win. The winning team will work out the plan together with designers from the municipality, after which it will be realised on location.

Abundant stones, weak social bonds
Tarwewijk is an old and stony city district in Charlois with a young and culturally diverse population. The district is characterised by (traffic) jams on the edges and quiet residential areas at its heart. A continuous flow of residents makes it difficult to establish meaningful social contacts and the formation of a sense of community. Many residents of Tarwewijk live there only for a short period of time: nearly one in three people live there for a year or less before they relocate again.

In the years to come, the Municipality of Rotterdam will invest in making the neighbourhood greener, in order to improve social cohesion as well as to make the living environment healthier and more resistant to climate change. Places to stay such as squares, sports fields, playing fields and small parks will be redesigned and better connected by a slow-moving traffic route.

Design competition
To ensure that the new squares truly belong to the district, Veldacademie was commissioned by the Municipality to improve the connection of plans to the everyday activities and needs of the district. To do this, we have launched a design competition in which people from the neighbourhood can participate in all sorts of ways. The competition includes a design for two squares near the monumental school building on Zwartewaalstraat.

Residents, local entrepreneurs and initiatives will be actively involved in the development of the district. They can participate in the design, contribute to the programme of requirements and have an important voice in choosing the winning design. This creates co-ownership, which benefits the management, programming and social control. In this way, the square is developed in a sustainable manner.

Neighbourhood-based programme of requirements
To find out what activities took place in the neighbourhood and what was needed, we talked to various kinds of people. Young people were asked about their wishes, street campaigns were organised in the summer to find out what passers-by and neighbourhood residents thought of the public space, and various professionals (teachers, welfare workers, civil servants, etc.) were interviewed. Additionally, workshops were held with primary school pupils, who were invited to imagine their dream square. The neighbourhood survey showed, among other things, that girls had different wishes for the squares than boys and that parents often preferred to keep their young children at home after school rather than let them play outside.

All input from the neighbourhood was incorporated into a varied programme of requirements for the squares, with places and programmes for all ages. Of course, it was important that the squares connect well with other squares and streets in the district so as to make the public space in Tarwewijk more attractive and greener.

The jury
Residents and organisations from the neighbourhood could vote for their favourite entry. Together they formed the public jury. The plans were also judged by a professional jury, consisting of Sandra de Bont (Senior Landscape Designer at the Municipality of Rotterdam), Indirah Tauwnaar (Director and Artistic Leader of House of Urban Arts), Bennie Tonnon (Deputy Director of OBS De Globe) and René van der Velde (associate professor of Landscape Architecture at TU Delft).

Subsequently, two winning teams were chosen; a neighbourhood team and a student team. The plans featured the addition of greenery in organic structures, additional space for sports, games and recreation, and the possibility for flexible use by different target groups. The teams were commissioned to jointly develop a coherent plan, supported by a designer from the municipality. To this end, we have set up a design studio.

The preliminary design will be further developed ino a final iteration over four working sessions. Each meeting has a theme on the agenda, and additional local experts from the neighbourhood invited. In additional workshops, sub-designs are further elaborated. Gym instructors and local artists are collaborating on designing the lineation of the sports field. Residents of the neighbourhood will choose the plants to be used in a number of planting schemes. Some of these plants will be self-managed.

The final design will be ready in the summer of 2022. The plan will be realised in the autumn. 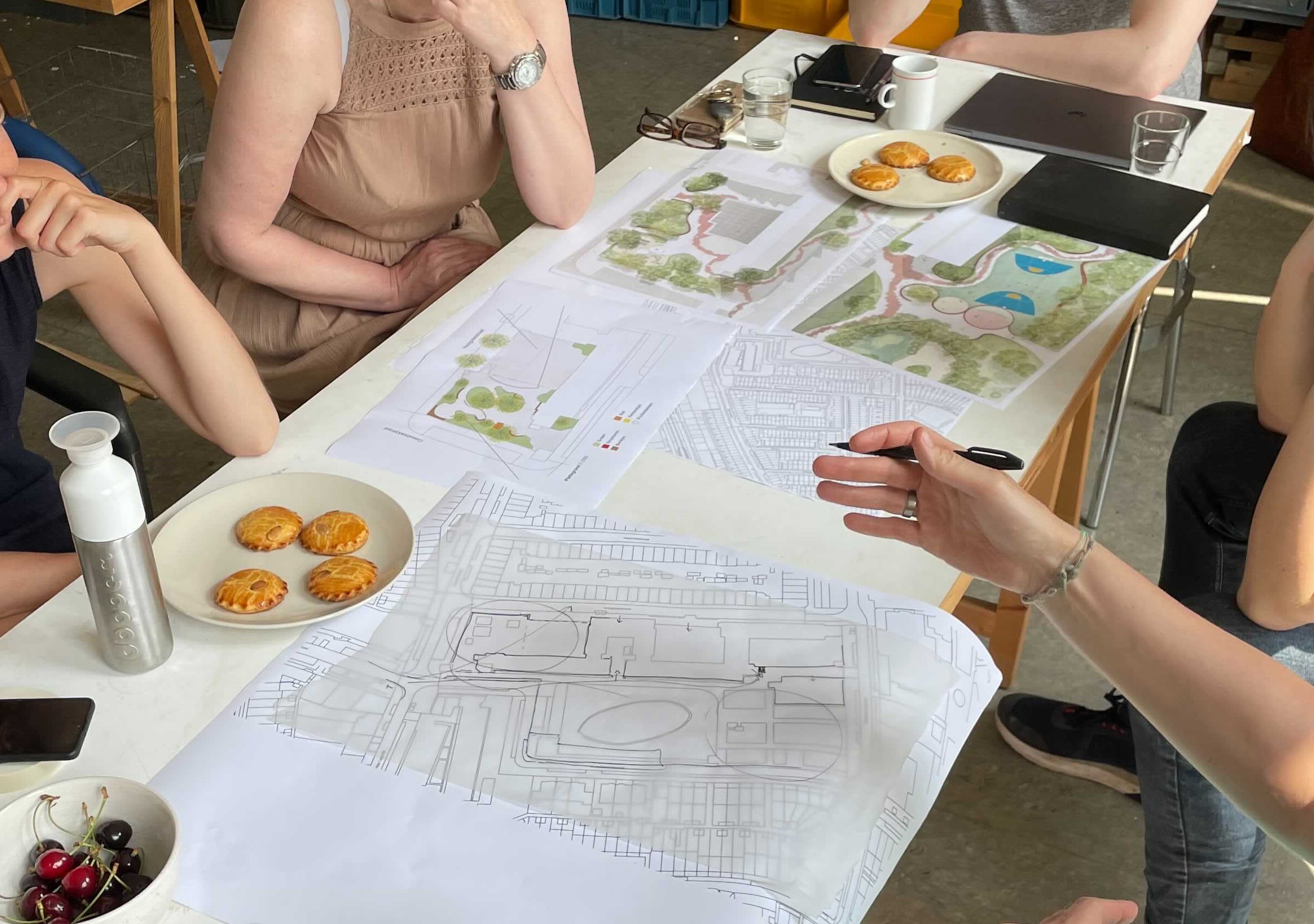 Educational Studio
In addition to the design competition, students from various educational programmes are working on the redevelopment of Tarwewijk. Architecture and Urban Design students from Delft University of Technology are working on, among other things, sports facilities in the district and the design of public space. They include target groups that are often overlooked. These students are also working on concrete designs for the neighbourhood. Students of the minor programme Public Health of the EUR, focus on exercise habits of young people in public space. Students from the minor programme Communication Design for Interaction at TU Delft are studying issues concerning safety and territorial behaviour in the neighbourhood.

Online platform
In order to connect with the neighbourhood during the lockdown, students set up an online platform. This website has developed into a communication platform where up-to-date information can be found from various parties, for example, about events in the neighbourhood. The site also contains a knowledge base with information about the policies of the municipality and the NPRZ, student projects and the results of our field research. View the website here.