ON THE ROAD TO A VISION FOR THE ENVIRONMENT

What does the ideal living environment look like for the city of Delft? How do we deal with the peripheries of the city and what does the street of the future look like? What choices should the city make when differing interests come in conflict? The Veldacademie spoke with a variety of Delft residents about the layout of the city in the project, Gesprek met de Stad or 'In Conversation with the City'.

The Gemeente Delft (the municipality) has started a participatory process to help them develop this vision for the living environment and has asked the Veldacademie to hold a "Conversation with the City".

Broad Scope
To conduct the "conversation", three mutually reinforcing research methods were chosen: a large-scale (online) survey, street interviews and group discussions. Residents and visitors to Delft were asked to give their opinion on the themes of living, working, facilities, public space, living together, sustainability, history, health and safety. 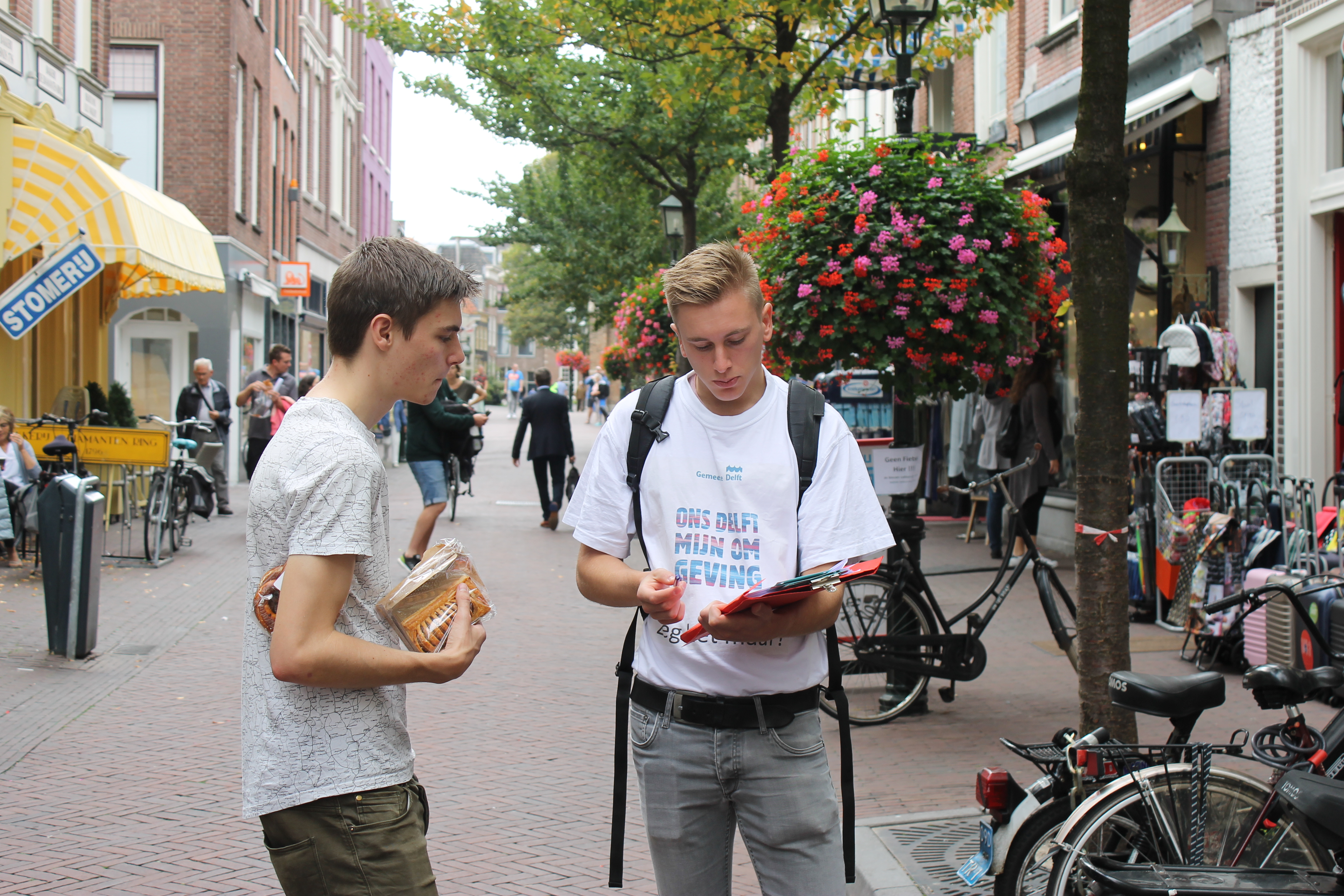 The project had a wide reach, with more than 2500 respondents for the online survey. By filling in multiple choice questions and responding to propositions, the people of Delft could share their wishes and preferences for the city. Another 1200 people were reached out, through street interviews in twenty days, spread over a month, in all areas of the city and varying times. During these interviews the residents could come up with creative and personal ideas for the design of their environment. In addition, nine group discussions were held. Some group conversations focused on groups that are not easily accessible from the street or through a website. For example, there were group discussions with people over the age of 80, with the blind and visually impaired, and with international knowledge workers and students. Other focus groups focused on specific themes, such as "mixed neighborhoods", "the outskirts of the city" and "the street of the future," and served to add depth and nuance to the project outcome.

Snapshots of the city
The Gepsprek Met de Stad has listed the main needs of the residents of Delft, culminating in a number of snapshots of the city. For example, the residents want Delft to be a city in which it is pleasant to live, with accessible, well-kept streets and neighborhoods that have opportunities to meet, spaces to play, sports facilities and a lot of green areas. They are conscious of Delft's rich characteristics and want it to be preserved. The residents are also proud of the city's historic and innovative heritage. Accessibility is also crucial to ensure a good living and working climate. To ensure accessibility, residents believe that there needs be better bicycle facilities, ample sidewalks and a close-knit public transport network through the city. For the residents, Delft is also a social and connected city. People are looking for different and new connections and would like to interact with the different groups that call the city home. There is also a lot of support for mixed neighborhoods with places for different groups of residents.

Demand for Space
There are a lot of tensions arising due to a lack of space. Residents appreciate a green living environment with plenty of meeting spaces and would rather not see their neighborhood being built on. But the demand for more homes is also high in Delft. And at the same time, companies are looking for room to expand. These various claims on space require trade-offs between individual and collective interests. These wishes can come together in the Omgevisngsvisie or the Vision for the Environment. Sustainability, energy transition and adaptation to climate change also puts additional pressure on urban development. Critical choices need to be made.

During this research, Delft presents itself as a true participatory city. People from Delft appear to be very willing to think about their neighborhood and the city as a whole. They would like to be involved at an early stage and be a part of radical changes in their street and in the public spaces of the city. As a follow-up to the process, the goal is to transfer and catalyse the collected knowledge. This will be achieved through seminars, workshops and round table discussions. Residents and employees of the municipality can be informed and initiated into the process in this manner, it will allow this dialogue with the city to become a continuous process.

The report with the results of the Gesprek Met de Stad can be downloaded at the bottom of this page. You can also order a hard-copy.